Beet or Not To Beet? (Updated Photos/Video) OUT OF HERE

Found out this is a "Redroot Pigweed".  This plant is coming out as soon as I get home.  Will be put in a black trash bag and put in the trash.  I don't want it reproducing.  I hope that I catch it in time.  Thanks Linda Lehmusvirta, CTG and Linda Lehmusvirta, A& M.

Previously Posted 06/27/2010-I think this plant will be a beet. The reason I say this is that I turned this bed for my spring planting and there were beet seeds previously sowed in this bed and only a few sprouted. If it is a beet, then I don't think it will last as the package says this variety is sensitive to heat (Ferry-Morse Beet, Tall Top Early Wonder). If you recognize this as a beet plant, could you let me know? I am going to allow this plant to grow and see what happens. It is nestled in between 2 eggplants, onions and carrots, so it is not harming anything, but I am not sure what it could be. 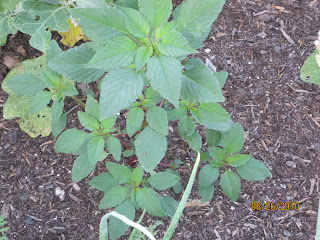 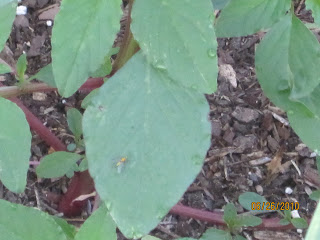 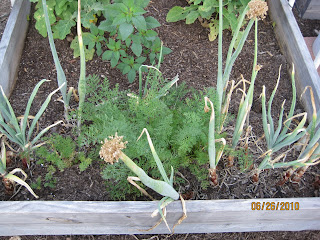 Update (07/18/10)-I have been doing more research, but still have not gotten a name for this plant. The leaves do not smell like mint and the plant has gotten quite big since posting. I took some more photos and a video of it with more closeups. I am hoping that someone will recognize it and give me some information. Thanks to anyone that has any information that will lead me to figuring out what this is. 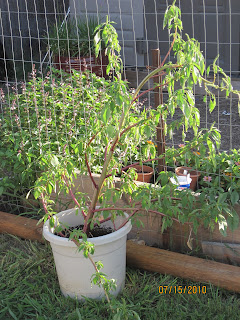 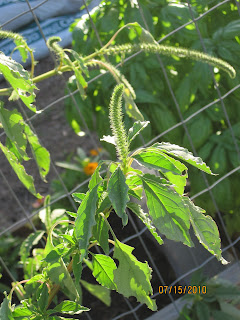 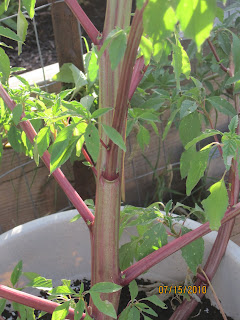 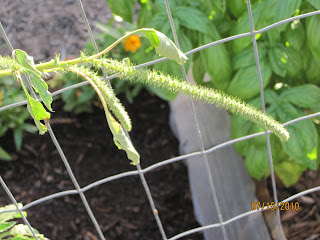 Today while doing some cleanup around the garden, I discovered that the greenery on the potatoes was severely ding back.  I decided today was the day to pull the plants and take whatever potatoes were in there.  I don't have a scale, but it was quite a bit (4X3 bed and on only the back portion was planted with seed potatoes).  We had a lunch of fresh french fries and they were good.

Well before I pulled the last plant stalk I noticed a tomato horn worm, then another.  I looked at the stalks that I just pulled and there was one there too.  After research I discovered that potatoes are in the nightshade family (same as tomatoes), so I assume that is why the horn worms were attracted to it.  I never noticed them before, so this whole time they were stripping the plant down.  No problem.  Next year I know what to do, plus the next bed will be a lot deeper so that I can get more potatoes. 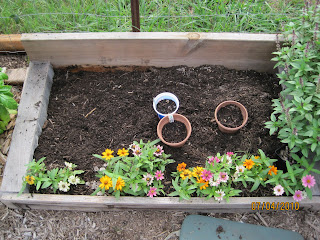 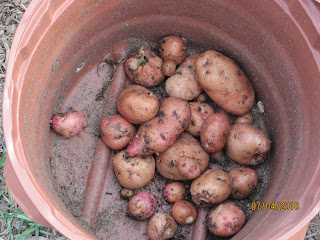 You can see in the background of this photo that some of the greenery is dying back. 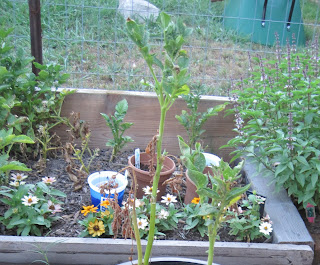 The photo below was taken upside down, Those are onions at the front of the bed. 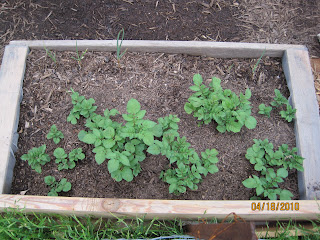 You can really tell below which seed potatoes took. 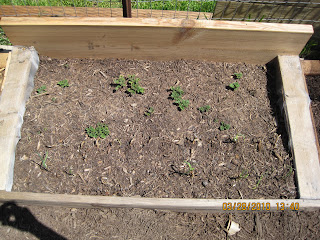 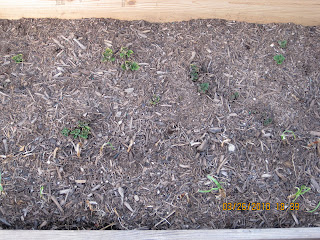 Thanks for stopping by and checking out what is going on in my life. Well I am a wife, mother of 1 extraordinary and talented (if I must say so myself and I did) human child and 2 children 1 of the dog family. I am a laid back crafty kind of girl who also likes to garden in zone 8b. I hope what I have to say will intrest you, but if not, no harm no foul. Thanks.

I was a "Super Volunteer"